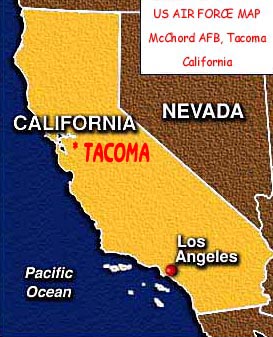 As it turned out, the flight home was to be my last incredible adventure.  I was to fly home on an USAF C-141 Starlifter.  Hey, how come I got to fly TO Vietnam on a nice chartered commercial airliner complete with pretty stewardesses and good food???  Well, I really didn’t care as long as this thing was headed home of course, nor did any of the other guys on the plane really care.  We boarded the plane and all of our baggage, including my new tape recorder, was stowed in the rear of the plane with a cargo net securely fastened over it. All of the seats on the plane faced the rear of the plane with the exception of the last 4 as I recall.  Kermit DeVaughn and I got to sit in a couple of those seats.  The crew chief informed us that we were to fly to Tokyo and refuel and change crews for the flight to Tacoma.  The flying time should be about 13 or 14 hours as I recall.  So, we took off. It was hot and humid inside the plane and most of us wound up stripping down to our t-shirts as a result.

After awhile the crew chief came back through and announced there was some problem with pressurization and that we were going to stop on Guam.  We landed there and of course it was very hot and humid on the ground as well.  The crew chief got off the plane for awhile.  When he got back on, he announced we would be taking off again.  The plane roared down that short-ass runway on Guam and then all of a sudden we could feel the pilot slam on the air brakes,  reverse the engines and trying to stop as quickly as possible.  We stopped and I looked out the window and we were no more than 100 meters from the end of the runway.  The crew chief got off again and I watched him go and crawl up into the wheel well area on the left side of the plane.  A little while later he got back on the plane, walked forward and them came back with some bailing wire and some wire cutters.  He got off and went back up in the wheel well.  I was ready to offer the crew my chewing gum to go with the bailing wire if it would help get this damned plane back into the air!  The crew chief got back on the plane, we taxied back to the end of the runway and this time successfully took off.  Now on a commercial airline they’ve always been good about telling the passengers what is going on.  Not so here. After awhile, the crew chief came through and told us they were still having problems with pressurization but that we would go to Tokyo as planned and get repairs there but that we could only fly as high as 10,000 feet due to the problem.  Hey...as long as this sucker cleared the treetops, I'd be happy.

We finally landed in Tokyo about 4 or 5 hours behind schedule.  A maintenance crew came aboard the aircraft and we knew of course we would be there awhile.  However, they wouldn’t let us off the plane to relax or anything.  We sat there for another 3 hours while they worked on the plane.  Then some AF guy came on board and told us the problems were all fixed and now they were trying to “find” the crew that was supposed to fly us on to Tacoma.  We figured they were all off and drunk by now somewhere.  Eventually a crew came aboard and we took off again.  This time the plane seemed to function well, we went to altitude and the cabin was comfortable.  Most of this flying was done at night and most of the guys drifted in and out of sleep during the whole flight.  I tried but was unable to sleep.  I was greatly struck by the contrast of this flight home and the flight to Vietnam the previous year.  Going over, we were all laughing, chatting with new friends, flirting with the stewardesses, etc.  On this flight hardly anyone ever spoke.  Even Kermit DeVaughn and I barely spoke on the flight home.  We had flown over together and now were coming back home together.  I don’t remember if Jim DeLoney was on this flight or not or whether he had gone home a few days earlier.

At one point I could see out the window and realized the sun was coming up and with my new camera I took a couple of pictures out the window of the sunrise over what I figured must be about Alaska.  Not being on a commercial plane, there were no announcements coming forth from the crew, smart-aleck or otherwise. About the time it got fully daylight outside we started to descend for landing.  The excitement of this arose for all of us.  As I looked out the window when we got lower I could see the land of course and I was amazed at first how much the Seattle/Tacoma area looked like the Bay area where I had grown up.  Damn!  This is simply amazing!

The more I looked the more I was astounded by the similarities! Then, I spotted what looked just like Mount Diablo near Concord, Calif.   Sunvabitch!  They got one of those too in Tacoma?!?   Wait just a fool minute, here!!  This plane not only had pressurization problems, it's compass wasn't worth a tinker's dam either!  Holy Cow, we are landing at Travis AFB in Fairfield, CA, not in Tacoma. Wonder if this pilot crew was suffering a serious hangover? You think someone might have told us??

Anyhow, I was pleased to say that now I would be home quicker plus be able to cash in my Tacoma commercial flight ticket and get my money back.  We landed, went through a quick screening for contraband (though I could have hid my AK47 with ease as all they did was open the bag I had and didn’t even look through it at all).

As soon as I was finished being processed I went straight to a pay phone and called Cathy in Sacramento. Told her I was home, at Travis AFB, and could she come get me.  Needless to say, she left to come pick me up as soon as she could.  I’ll never forget seeing her driving in and seeing her again after a year to the day.  I was so thrilled to see her.  I drove home which felt really strange since I hadn’t driven a car on a freeway in over a year at that point.  We got to her mom’s apartment, and she took me into see Leslie for the first time. Leslie was asleep in her crib. {See "GANGWAY - Man with a baby!"} I remember picking her up and holding her for the first time and how wonderful all that felt.  I was so tired from the 30 hours of being cooped up on that plane and everything else that I took a shower and laid down to “nap”.  Cathy let me sleep and I slept for about 14 hours.  But I was home.

From that day till now Cathy and I never have spoken about that year in any kind of detail.  To this day, I doubt she could tell anyone much about what I did, what I experienced or anything specific about my tour. Now I regret that cause I feel down inside that if I had dealt with the “demons” that stirred in my soul and still remain to some degree, that maybe, just maybe, we might not have made the mistakes that ultimately led to our divorce. That year had changed me in fundamental ways that even to this day I do not fully understand. The re-creation of my journal and all that surrounds it is a continuing process of “cleansing” for me.  I do know however much I “scrub” that it will always be a part of me and a huge part of what made me who I am to this day.  Good and bad.

But, hey...I made it home.  Only God knows where those pilots are now!!