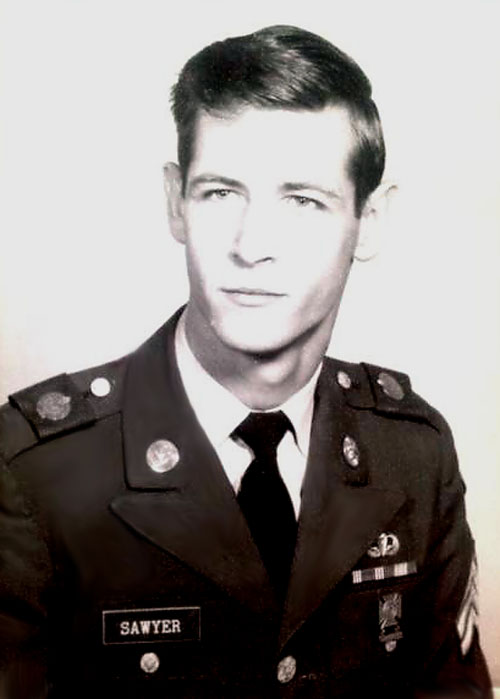 {Webmaster's Note: This tribute is a tragic recounting of a events surrounding the loss of Recon Sgt (SSG) Michael K. Sawyer from a "friendly fire" incident. It goes way beyond the kind of tragic death that all redlegs hate to hear about.  Sgt Mike Medley was sitting in the FDC with SSG Sawyer at the ill-fated LZ St. George the night before the occurrence. Here are his words....}

It was the night before he was killed that we spent most of the night in FDC discussing the future.  Sawyer was a Recon Sgt fresh in from his grunt time; he was supposed to go back to (Camp) Enari the next morning to process out but instead chose to go out the next day and night on a quick overnighter.  He had orders to the jump school at Ft Benning and was looking forward to the pro-pay supplementing his base pay.  He and his wife were adopting a baby girl and he had just received notice a few days before that the adoption had been finalized.

About 10 or so years ago, a retired Gunny saw my post on Sawyer's Wall page and emailed me.  He had been a neighbor of Sawyer's widow and daughter.  I had a million questions for him but we lost touch.  I always kept a framed copy of George Skypeck's "Soldier" on my office wall from the mid-80's on with Sawyer's Wall rubbing attached until I retired, then it moved to my home office so I will never forget how fickle life is and how lucky we surviving field troops are.  The incident along with others from Nam destroyed my belief in God for several decades.  I finally developed my own spiritual belief that did not include every untimely death was "part of God's plan".

Sawyer and a Delta troop were killed by gun #5 "shooting out" on a "Battery Three".  Sawyer was shooting at lights moving towards the night laager.  I was monitoring the radios that night I'll never forget the new RTO calling a check fire.  My memory is that I got it stopped after the second round went out.  The RTO was incoherent and hysterical.  I told him to put Sawyer on.  He said he couldn't.  When he told me why it tore my soul out and stomped on it.

At first the "rear lifers" investigating the "friendly fire incident" tried to blame the FDC chart operators and then my computing, but the data I sent to the guns was perfect.  Then they tried to blame TiTi Sgt's (Wilson's gun 5) section and brought out some fancy equipment from the rear.  Turned out is was a worn out tube.

Webmaster Epilogue:  This tribute underlines the founding of The Mighty Ninth website.  To honor our brothers who paid the ultimate price for serving their country in our unit.