NO THANKS, I'LL STAY HERE! 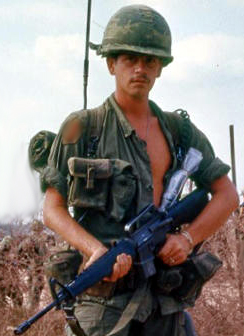 Good Advice: Don't Be A Hero

During my tour of duty as the FO for A/2/35, my boss was Captain Charlie Murray, a West Pointer...but I didn't hold that against him.  He was a damn fine Infantry Officer, great leader, and a shining example to his men.  I felt privileged to be his FO.  When I arrived at the unit, I'm sure he had his doubts.  I had just come in from the States, spent a week waiting for an assignment, and had no idea what the hell I was supposed to be doing.  Further, I was no physical specimen, about 5'10 and 127 lbs.  But Charlie did learn I could read a map and drop a 105 round in your lap.  We quickly gained each other's trust.

Sooooo, I asked him, "What do you want me to do?"  He replied, "You stay right by me, in my Command Group".

And so it went.  But...this did not go unnoticed by his Platoon Leaders.  When the unit halted, Charlie would give them assignments to go in this direction or the other on a typical "search & destroy" mission, leaving one Platoon in reserve.  Meanwhile, I stayed back with "the Boss".  This led to some teasing by the Platoon Leaders, especially Lt Steve Putnam.  Steve was constantly "inviting me" to join his Platoon on a search and destroy assignment while the rest of the Company held their position.  Other Platoon Leaders joined in; they liked giving me a hard time in good fun.

On one such halt in our daily hump of the boonies, Lt Putnam's Platoon was sent out to go search.  A short while later, we heard several bursts of an M-16.  "Oh, shit", I thought.  Putnam's group made contact and now we have a fight on our hands.  But then we heard...nothing! Surely these guys know that you don't fire your weapons for the fun of it. What's going on?

Eventually, Steve came into view with his Platoon.  He said they came upon three NVA soldiers having lunch by a stream.  They caught them by surprise and made short work of them.  Apparently they were pretty green soldiers not to have a lookout or guard.  And they weren't the lead element of a larger force.  Not a daily occurrence here, for sure.

This incident gave Steve the opening he was looking for.  "Ya see there, Dauphin!  If you woulda come with me, you could have gotten a CIB!"