Class of 1962, Captain of the Army Football Team

(Capt Casp was participating in a Reconnaissance mission as the acting Artillery Liaison to the 1/35th Inf Regt.  A soldier witnessed Mike's chopper go down. The information is from a 35th Inf Regiment combat report about the death of another USMA grad, Major Gerald Wynn ('56). Mike was with him and the 1/35 Inf Bn Cdr LTC Robert Kimmel (USMA '52) when their helicopter was shot down by enemy fire.)

According to records uncovered during research for this biography, Major Wynn was the S-1 for the Third Brigade of the Fourth Infantry Division from August 1, 1967 to October 25th, 1967. However, that starting date is at odds with Major Wynn’s casualty data from The Wall, which shows the
major did not come in-country until September 2, 1967.

The 3rd Brigade of the 4th Division consisted of three infantry battalions: 1/35 (Cacti Green), 2/35 (Cacti Blue), and 1/14 (Golden Dragons) All three of these battalions had accomplished records in Vietnam, as well as Korea and WWII. Initially in the 25th Infantry Division, the three battalions became members of the 4th when those two divisions swapped third brigades on August 1, 1967.

As brigade S-1, Major Wynn would have acted as the adjutant, being responsible for ensuring that matters involving personnel, finance, record keeping, orders, assignments, etc. were competently carried-out by each battalion’s S-1.

Major Wynn became the S-3 for the 1/35 on October 26, 1967. The 1/35 (First Battalion, Thirty-Fifth Infantry) consisted of: a HQ Company, four rifle companies (A, B, C, D) and a Company E which consisted of the Recon Platoon and Heavy Weapons group. As battalion S-3, Major Wynn was the operational planner, sorting through various intelligence gathered and deciding on missions and daily movement routes of the four rifle companies and the Recon Platoon.

At the time Major Wynn joined the 1/35, the battalion was attached to the First Brigade of the 101st Airborne during Operation Wheeler in Quang Tin province. On November 4, 1967 the 1/35 became attached to the Third Brigade, First Air Cavalry Division while participating in Operation Wallowa in northern Quang Tin and southern Quang Nam provinces. At this time, the 1/35 was operating in, or slightly outside, the Que Son valley. That valley is 24 miles long and is nestled on the borders of Quang Tin and Quang Nam provinces. Surrounded on three sides by double-canopy jungled mountains, the valley was home to 60,000 people and very fertile rice paddies. With the twin attractions of a large population to recruit from and an excellent source of foodstuffs, the valley was coveted by the VC/NVA and was hotly contested for the duration of the American involvement.

The four rifle companies though usually operating in the same general area so as to be somewhat mutually supporting, were usually separated by several kilometers. In addition to distance, the difficult terrain made the helicopter indispensable for the Battalion staff. Using the helicopters as a mobile command post, each company could be visited daily, if required, for consultation with individual commanders. Also, the "big picture" view from above during an actual fight afforded the Battalion staff the advantage of seeing nuances not always as readily noticeable to beleagured troops on the ground.

The events leading to Major Wynn’s death began unfolding on the morning of November 13, 1967. A six-member First Air Cavalry Division Blue team from the 1/9 was operating in western Que Son valley. A Blue team was in essence a self-sustained reconnaissance unit. They would fly around looking for "hot spots", had helicopter gunship support and additional infantry support prioritized to them, and also could call in the regular line companies if the action was too big for them. On this particular morning, the Blue team spotted an NVA standing in the middle of a rice paddy and making gestures as if he wanted to surrender. Coming closer for a better look, their chopper was shot down by an NVA anti-aircraft battalion dug into a nearby village. The NVA’s weapon of choice for such encounters was the 12.7-mm machine gun, their equivalent of our .50 caliber. The NVA’s ultimate goal that morning was not the Blue team but rather the choppers sent to rescue the team and to attack the village. Reliable reports fix the number of helicopters shot down that day at between fifteen and twenty. As the day wore on the Blue team’s position became more and more vulnerable. They were pinned-down with scant cover in a rice paddy outside the village and running very low on ammunition. Their parent unit was spread very thin trying to provide security at every downed chopper. Being the closest available line company, we (Company A, 1/35) were ordered to prepare to move by helicopters to their aid. Our sister company Bravo was also involved in securing a downed chopper and crew approximately one kilometer from the Blue team. They in fact suffered the lost of one lift ship on the way in resulting in four deaths.

At that time, we were located several miles to the west still near the site of a major engagement a few days before on November 9. Supported by a squadron of Armored Personnel Carriers (APC’s), we had assaulted a suspected NVA hospital complex. The engagement lasted from dawn until dusk with much heroism shown on both sides. The Executive Officer for the APC’s, James A. Taylor, was awarded the Medal of Honor that day and the NVA fought to a standstill a total of three American infantry companies supported by armor. Major Wynn and our Battalion Commander Colonel Robert Kimmel, were both overhead that day coordinating air strikes and lifting-in two other companies in an effort to completely cordon-off the complex.

The choppers picked us up at about 1730 hours and flew very low on the way in so as not to tip-off the NVA gunners of our approach. We still drew heavy fire as we neared the trapped team, the air being filled with green tracers from the 12.7-mm guns. Several of our lift ships took hits but, miraculously, we landed unscathed and were eventually able to reach the Blue team and spent the night with them in the rice paddy. During the night the NVA managed to get close enough to hit the Blue team’s downed ship with a recoilless rifle. The ship burned all night with ammunition still on board "cooking-off" at frequent intervals. In addition, the trip in had flown us completely off the field map Captain Chaplinski had; as a consequence we had no communication with our battalion Net and could not even call in artillery. All in all, it was a very restless night spent in that muddy, damp paddy.

At around 0730 the next morning, Colonel Kimmel’s Command and Control chopper (C&C) appeared overhead. Rain had moved in during the night and the morning remained dark and dreary with low-hanging clouds. Aboard with Colonel Kimmel were Major Wynn, the artillery liaison Captain Michael Casp {Webmaster's Note: Capt Casp was the Battery Commander of "A" Battery, 2/9th. On this mission, he was filling in for Capt Terry Pierson, who was on R&R at the time}, 1Lt. Randy Shaffer, plus two pilots and two door gunners. Their chopper had just left B, 1/35’s position.

Colonel Kimmel was talking to our company commander, Captain Charles Chaplinski, by the radio. Apparently a large group of NVA had been spotted to the north and the colonel wanted us to move-out in pursuit of them. Captain Chaplinski replied that we were first waiting for the Blue team to be extracted. The colonel insisted that we move-out immediately but Captain Chaplinski refused, noting that he did not want to leave the Blue team by themselves. The exchange grew very heated and finally the captain agreed to at least start one platoon moving toward the new objective.

All during the radio exchanges we could see green tracers from the southeast rising toward the C&C ship from quite a distance away. Though the NVA had deserted their original position in the village, they still had a presence in the area. Captain Chaplinski repeatedly warned Colonel Kimmel that they were taking fire, "Sir, you are taking fire, sir please be advised that you are taking fire from the south east." The colonel finally acknowledged the danger and replied, "We will attempt to rise above it." Now the 12.7-mm had a range of about one mile, so that was easier said than done.

Shortly after Colonel Kimmel’s last transmission, we heard a loud "ping" and looked up to see that the rear rotor had come-off the C&C ship; undoubtedly shot-off. The rear rotor was held on by a large nut, referred to by the helicopter mechanics as the "Jesus Nut," it seems likely that a 12.7 round hit that nut. Without a rear rotor a helicopter has no lateral stability and is nearly impossible to control. However, it appeared for a few seconds that the pilot might succeed in landing it. At this point Major Wynn came on the radio and said, "We are coming in." Captain Chaplinski replied that they were over our perimeter and they should attempt to come down where we were. That was the last transmission we heard. Shortly afterwards, the tail of the C&C ship swung completely around, the ship went into a spin, and spiraled, nose-first, straight down.

It hit about 75 yards from our perimeter; there was a brief fire on impact but {Webmaster's Note: this is corroborated by Lt. Bert Landau, who was on the ground at the time.} I seem to recall it being out by the time we reached the helicopter. Lieutenant Shaffer’s body was outside and the others were in the wreckage. One of the door gunners had apparently tried to jump clear of the ship, his body was found in a clump of bamboo about 100-150 feet from the crash.

In addition to Colonel Kimmel’s staff, the following men were also on the ship.

(This accounting of the death of Mike Casp was sent to us by Bob Ord. USMA Classmates will remember that Bob was a Teammate of Mike's on the Army Football Team.)

Captain Mike Casp became the Battery Commander of "A" Battery, 2/9th FA in the late Spring of 1967.  He replaced the prior Battery Commander who suffered a serious injury to his right leg due to a "short round" incident that should have never occurred.  The perimeter guards were firing H&I mortars using an 81mm mortar in a criss-crossing pattern over LZ OD.  This proved almost fatal to the prior BC.

Capt Casp was a "quick study": very bright, very articulate and a graduate of West Point.  However, I hasten to note that Mike was not a "ring-knocker"...one of those annoying "know-it-alls" who assume the position of general before they get there.  He inherited two very experienced Fire Direction Officers, myself and Lt Dennis Munden.  We worked on/off 12-hours shifts in the Fire Direction Center (FDC).  Once Capt Casp saw that we had this shop working efficiently, he gave us all the support we could ever ask for.  When I was suddenly "promoted" to the position of Executive Officer (XO) due to yet another incident, I couldn't have asked for a better boss.  A working relationship is far better than an adversarial one.

I completed my tour in late October, 1967.  Two weeks after I returned home, I got the news that Mike was KIA.  I was shocked and saddened.  I was further saddened by the fact that Mike was filling in for another officer at the time; he was not acting in the capacity of the "A" Battery Commander.  He and others were on helicopter recon mission that was shot down; none survived.

I have nothing but the greatest respect for Captain Mike Casp; may he Rest In Peace in his heavenly home. 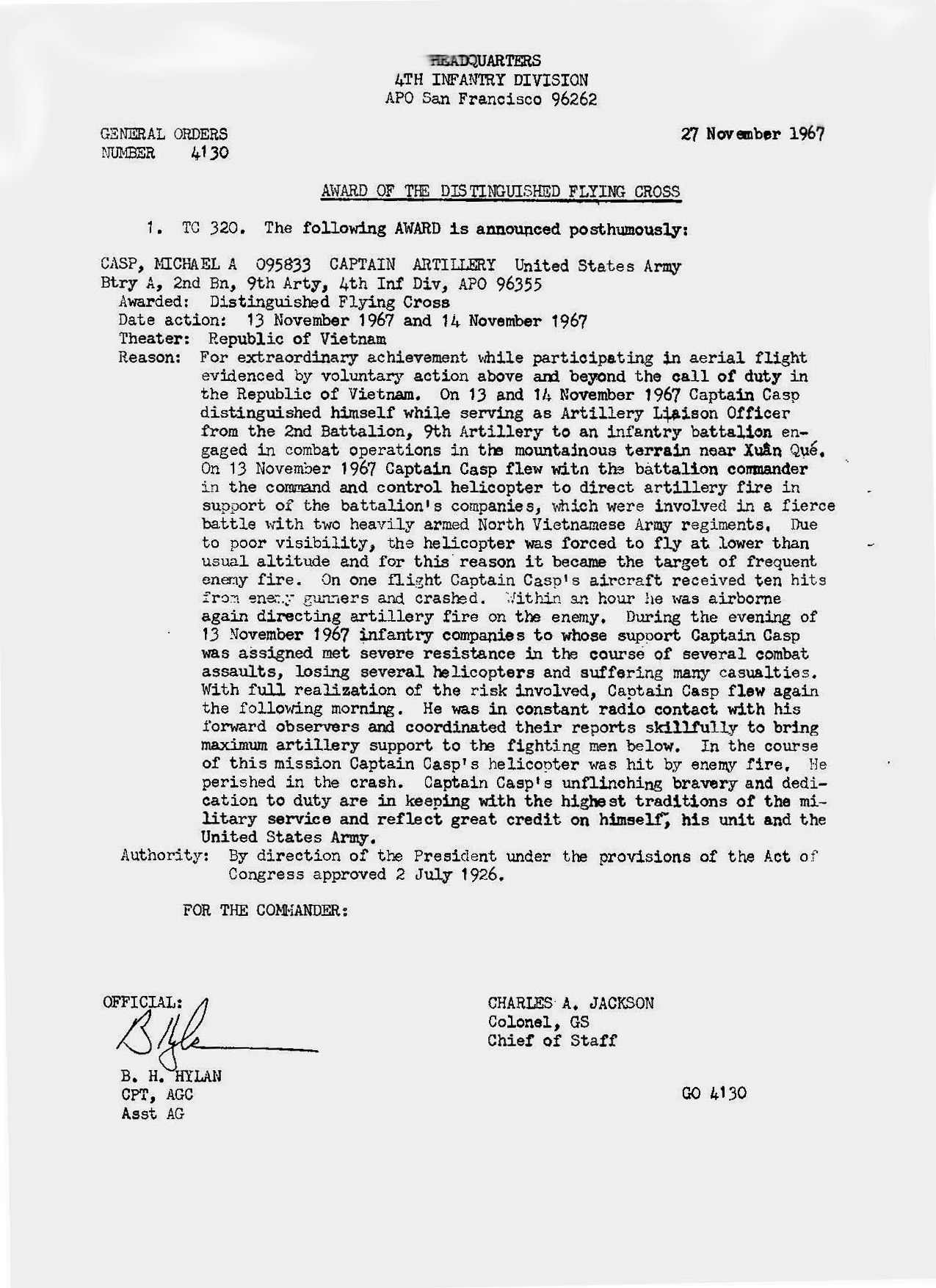