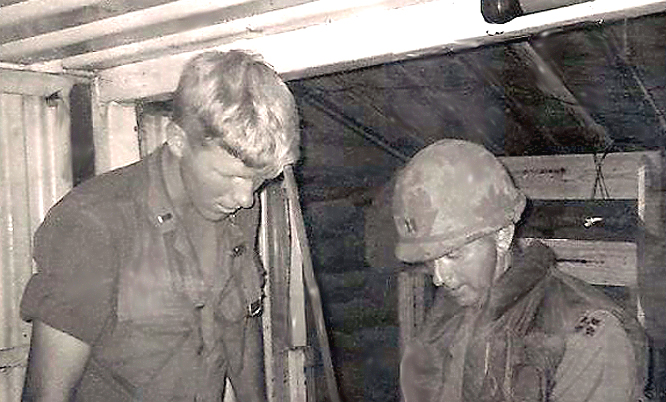 Lt Jim McHugh, conferring with  BC Richardson
"A" Battery

James E. McHugh – born October 16, 1947 in Washington D.C., the son of Col. James McHugh and Alice Zeiler McHugh, and younger brother to Nancy McHugh. Jim was raised in Virginia, with some time spent in Germany and Tucson. In 1966 Jim entered the Army as a Private, he was sent to Officer Training and in 1967 was commissioned a First Lieutenant. Jim served in Viet Nam and was discharged in 1969 as a U.S. Army Captain. Jim went to work for the Veteran Administration in D.C. and transferred to the Phoenix office in 1974. Not one for indoor office work, Jim quit the VA to start his own business and enjoy the outdoors. He started "Mostly Tennis" and taught tennis at Kiwanis Tennis Center and Gene Autry Sports Complex. He also coached girls’ tennis at Gilbert HS, Highland HS, and lastly at Westwood HS.

Jim lost his battle with Melanoma December 8, 2017. He is survived by his sister; Nancy McHugh and long-time friends Al, Carolyn Sinclair and family; Ed, Adrienne and Paige Sloat and Amy Novotny. A Celebration of Jim’s Life will be held at 1 p.m. February 3, 2018, at The Falls Event Center, 4635 E Baseline Rd, Gilbert, AZ 85234.